Happy New Year Everybody!! I thought I would round up the year by taking a look back at how far my knitting skills have come on in just one year!

Last Christmas I decided I wanted to learn to knit and asked for some supplies for Christmas. Nearly 1 year on and I feel like I am now a happy knitter! There were a few hiccups along the way but also some great projects too!

I started off just knitting a few swatches and was dropping stitches all over the place! At first I couldn’t figure out how on earth I was managing to loose so many stitches but once I got into the swing of things I managed to get going.

For my first proper project I decided to knit a cover for my Kindle. Not being a blogger at the time I didn’t get any good photos of the finished object but managed to  et one now – so you’ll have to excuse how grubby it looks but generally I was really pleased with it for a first project even if it did take forever!

I then moved on to something much more extravagant…a hat! I still love it and wear it all the time even if the bobble is a bit loose and some of the ends have unwoven themselves

Then I started this blog and the knitting began to be documented. I’m not sure if this made me think more about what I was knitting or if it made me want to make it better because everyone would see it but the skill level definitely kicked up a notch!

My next make was these fingerless gloves, it took a bit of help to figure out the thumb but after a few friends got stuck in we had it figured out and I was away! Another successful project. 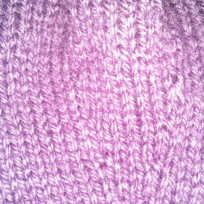 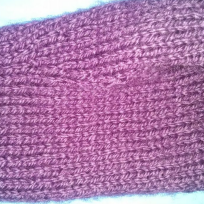 For my next project I wanted to make some boot cuffs. After a long search on Ravelry I couldn’t find any that I liked that could be knit flat and did not quite feel ready to attempt knitting in the round so I decided to make up my own pattern! I also wrote up this pattern and it is available for free on Ravelry if anyone else, like me, wants to make some simple bootcuffs that can be knit flat and seamed.

After the success of writing my own pattern I decided to turn my hand to something more complicated! I think I was probably a it too ambitious and cast on a double length cowl on circular needles. Everything was going really well, I had managed the joining in the round and an inch of ribbing but once I got onto the body of the cowl things started to go worng! Why on earth I picked lacework for my 5th project I’m not sure but it certainly was a challenge. After only a few rows the lace pattern was completely out of sync and I was getting a bit demoralised so I decided to set it to one side.

This was quite a big decision as I dont like to give up on things easily. So instead of saying I had given up I have just left it for a little while to be returned to once my skills have improved.

So, I decided to try a different lace project to improve my skills. The oyster shawl seemed like the perfect solution as there was a large body with only a simple eyelet to contend with.

It uses a much simpler pattern with periodic holes 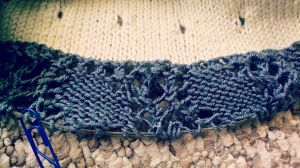 After working on this cowl for quite a few months I had to put it to one side for a while as I had some gifts to get to work on. I decided to knit a cowl for my mums birthday and had the perfect yarn for it! Again, I couldnt find quite the right pattern for it so decided to make it up as I went along. Hopefully I will get the chance to write this up soon (Watch this space!) 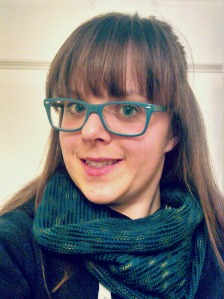 After making my mum’s birthday gift I decided to join in with the innocent big knit too. 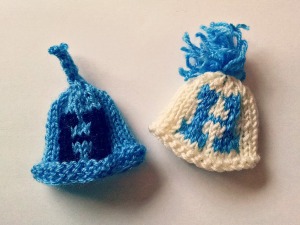 Finally, in time for Christmas I finished the lacy border shawl. I was so pleased with myself as this was such a massive achievement, especially considering that less than a year ago I couldnt even knit a 3inch swatch without dropping at least 10 stitches! 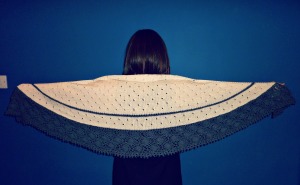 So what now? well actually, I’m already progressing well with my next project. I have been an admirer of Andi Satterlund’s blog Untangling Knots for a while and really wanted to knit one of her cardigans. Especially as I kind of feel like you cant call yourself a knitter until you have knit a cardigan or jumper. So, when I saw she was organising a post-Christmas selfish sweater knit-along I just couldn’t help but start choosing my yarn and pattern.

I decided to go with the Miette cardigan, it’s a really cute cropped cardigan for the summer with a little bit of lace detail around the edges – perfect for showing off my new found skills!

I have chosen to knit it in Drops Paris, which is 100% cotton so it will be amazing for the warmer weather. In fact, I am enjoying knitting it so much I have raced ahead a little and already have the body of the cardigan done. There’s only sleeves and the button band left to do. I dont think the deadline for the knit-along in february should be a problem! 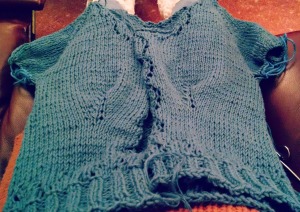 I almost cant quite believe how much I have knit in one year and how far my skills have advanced. Hopefully this will continue into 2016 and I can learn lots of new skills and complete loads more projects!!

I have some exciting news!

If you liked the look of my boot cuffs that I made in my previous post you will be delighted to hear that the pattern is now available to download for FREE on here on Ravelry!

I would love any feedback anyone has on this pattern as it is my first attempt at publishing and I’m sure there will be some mistakes. I have tried to keep it simple though and as I explained in my last post the boot cuffs are a simple make and are knitted flat.

Perhaps you could make them as a mothers day gift (UK mothers day is on the 12th March in case you were wondering!)

I hope you enjoy this pattern.

With a few basic knitting projects under my belt I recently decided it was time to challenge myself and get inventive!

I have a beautiful pair of leather boots but they are just a little too big around my calf so I decided to make a boot cuff. If you dont know what a boot cuff is just head over to Pinterest and you will find literally hundreds of patterns. However, I decided not to follow any of them! Mostly because they were either completely plain or involved fancy cabling – something which I have not yet attempted. Instead I decided I would create my own. I have decided on quite a simple stitch pattern with some ribbing at the top and bottom. I worked them flat as I thought it would be nice to use slightly bigger needles (which I dont yet have in circulars or double pointers) to make the boot cuffs stretchier and more forgiving if I accidentally made them too small!

I am really happy with the finished boot cuffs and I think they go great with my boots! What do you think?

Hi! I’m Helen and I love to craft, crochet, knit and sew. You can find out some more about me on my About page

Want to keep up to date with everything that is new at HsHandcrafts including lots of great offers and freebies?

Keep up with me across the web on the following platforms

If you click through to some of these partners using these links I might get a small comission ;) I might also sometimes add links to their products in my posts but i promise i will always make that clear